We have reached the half way mark, With the completion of October tournament the season is half over. Its been a great year so far. We have had 4 fish over 8 pounds weighed in so far. Dale & Glenn continue to hold a good lead for the angler of the year but the 7 teams are only 10 points apart so it is setting up to be a race to the finish line. Lets hope the second half is a much fun as the first. West lake Toho was this months lake choice and the fishing was pretty tough. Although most of the teams mange to catch a few the numbers were down a bit for this fishery. We had 17 boats that manage to catch 72 bass,10 limits,5 fish over 4 lbs, 2 over 6 lbs and 1 over 8 for a total of 143.21 lbs of fish. Not what this lake is known for but not as bad as Marion. Rounding out the money spots coming in 3rd was Lee Barbee fishing alone with 12.80 lbs. Coming in 2nd was Brandon Blondeel with 13.56 lbs. Top honors went to Cody Hayes & Austin with 14.14 lbs. Austin also had the days Big Fish that went 8.60 lbs. The days small limit went the legendary team of Barry & Wendy Norton with a five fish limit busting the scales at 5.50 lbs. Congrates to all the winners. 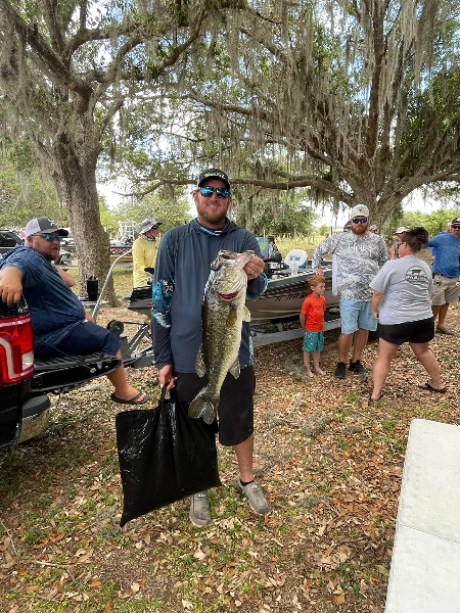